Sodium dl-α-tocopheryl phosphate (TPNaTM) is a water-soluble vitamin E derivative with special chemical structure developed by SDK, and was approved by the Ministry of Health, Labor and Welfare as a basis of quasi-drug to prevent rough dry skin in 2004. TPNaTM shows anti-inflammatory and moisture-retention effects as an ingredient of cosmetics, and is acclaimed very highly by our customers who manufacture cosmetics.

This time, SDK discovered that TPNaTM as a single ingredient can improve multiple types of dark circles through diverse approaches. TPNaTM shows promise of improvement on blue circles because it improves the circulation of the blood and metabolism. SDK also found that TPNaTM has increasing effect on enzymes which take part in breakdown and removal of pigments that cause brown circles. In a clinical test for four weeks, TPNaTM improved the L* parameters (numerical values indicating luminosities of skin colors) of the surfaces of lower eyelids in 82% of examinees.

SDK will exhibit this effectiveness of TPNaTM on dark circles at its corporate booths, one in the general meeting of the International Federation of Societies of Cosmic Chemists (IFSCC) to be held in Orlando, Florida from October 30th to November 2nd, and another in the “in-cosmetics Asia” exhibition to be held in Bangkok, Thailand from November 8th to 10th. SDK classifies its functional chemicals business including cosmetic materials business into “Growth-accelerating business” in its ongoing medium-term business plan, “Project 2020＋,” and is promoting this business aggressively. SDK aims to expand its lineup of high-functioning cosmetic materials to meet customers’ expectations. 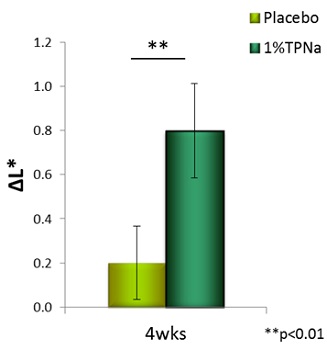